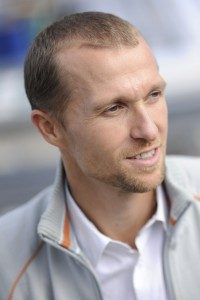 Bio: Anthony Wachs is an assistant professor with a joint appointment in the departments of Mathematics and of Chemical and Biological Engineering at the University of British Columbia, Vancouver, Canada.

He received his B. Sc. and M. Sc. from the University Louis Pasteur of Strasbourg and his PhD from the Institut National Polytechnique of Grenoble in 2000. Right after, he was hired in 2001 as a Fluid Mechanics research engineer at IFP Energies nouvelles (IFPEN, at that time Institut Français du Pétrole) in Paris.

In 2009, he spent a one-year sabbatical at the nuclear research center of Cadarache in the south of France, where he worked for IRSN (the french national safety administration for nuclear energy). In 2010, he got his HDR (French Habilitation to Supervise Research) and was later promoted Scientific Advisor at IFPEN in Multiphase Flows and Scientific Computing. He then moved to IFPEN-Lyon where he supervised a group of researchers (including PhD and post-doc students) on the numerical simulation of reactive particulate flows (www.peligriff.com).