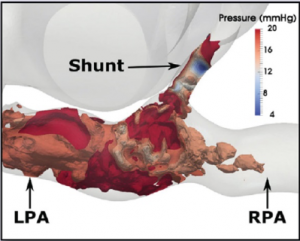 A group of researchers led by U-M Drs. Ronald Grifka and Alberto Figueroa used computational hemodynamic simulations to demonstrate its capacity for examining the properties of the flow through and near the BT shunt. Initially, the researchers constructed a computational model which produces blood flow and pressure measurements matching the clinical magnetic resonance imaging (MRI) and catheterization data. Achieving this required us to determine the level of BT shunt occlusion; because the occlusion is below the MRI resolution, this information is difficult to recover without the aid of computational simulations. The researchers determined that the shunt had undergone an effective diameter reduction of 22% since the time of surgery. Using the resulting geometric model, they showed that we can computationally reproduce the clinical data. The researchers then replaced the BT shunt by with a hypothetical alternative shunt design with a flare at the distal end. Investigation of the impact of the shunt design revealed that the flare can increase pulmonary pressure by as much as 7%, and flow by as much as 9% in the main pulmonary branches, which may be beneficial to the pulmonary circulation.

Read more in Frontiers in Pediatrics.