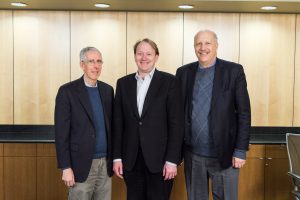 From left, Al Hero, U-M; Patrick Wolfe, UCL; and Brian Athey, U-M signed an agreement for research and educational cooperation between the University of Michigan and University College London.

ANN ARBOR, MI and LONDON — The Michigan Institute of Data Science (MIDAS) at the University of Michigan and the Centre for Data Science and Big Data Institute at UCL (University College London) have signed a five-year agreement of scientific and academic cooperation.

The agreement sets the stage for collaborative research projects between faculty of both institutions; student exchange opportunities; and visiting scholar arrangements, among other potential partnerships.

“There is a lot of common ground in what we do,” said Patrick Wolfe, Executive Director of UCL’s Centre for Data Science and Big Data Institute. “Both MIDAS and UCL cover the full spectrum of data science domains, from smart cities to healthcare to transportation to financial services, and both promote cross-cutting collaboration between scientific disciplines.”

Alfred Hero, co-director of MIDAS and professor of Electrical Engineering and Computer Science at U-M, said that one of the original goals of the institute when it was founded in 2015 under U-M’s $100 million Data Science Initiative was to reach out to U.S. and international partners.

“It seemed very natural that this would be the next step,” Hero said, adding that it would complement MIDAS’s recent partnership with the Shenzhen Research Institute of Big Data in China. “UCL epitomizes the collaboration, multi-disciplinarity and multi-institutional involvement that we’re trying to establish in our international partnerships.”

Wolfe visited Ann Arbor in early January to sign a memorandum of understanding along with Hero and Brian Athey, professor of bioinformatics and the other MIDAS co-director.

The agreement lists several potential areas of cooperation, including: